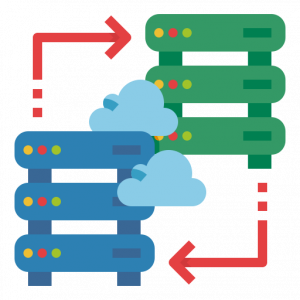 GIG Cloud has just received another update and it comes packed with a number of new and exciting features. What's special about this update is that it allows for more flexibility in accessing resources and getting data about them. In this post, we will go through a brief description of each of the following features:

With anti-affinity you can add more robustness to your applications and VMs. Anti-affinity allows you to specify labels to your Virtual Machines; these labels are used to figure out where these VMs get deployed. Anti-affinity ensures that no 2 VMs with the same label end up on the same physical node. That being said, in the very unlikely scenario of a cloud failure, rest assured that one of the two machines will still be up and running. For more details on how to use this feature, please see this tutorial

Consider the case where you need 3 Virtual Machines as follows:

Now you can add and remove proxy configurations to your cloudspaces via the new addProxy and removeProxy API calls. This allows you to use a number of features offered by Traefik in order to handle traffic within your cloudspaces. In this tutorial we provide a more detailed description of this feature as well as some examples on how to use it.

Access control to the resources based on organization membership

With this feature, you can define organizations (groups) which users can be granted membership to. You can then add access control for a group (instead of a specific user) to Accounts, Cloudspaces or Virtual Machines. Then you can simply add users to that group which will allow them to share the same access level to these resources. This is made possible by the new API calls addGroup and deleteGroup

Now instead of adding group access for your individual users on 3 different cloudspaces, you can simply make them members of their corresponding groups. This also allows you to change access levels for a huge number of users by simply changing their group access in which they belong.

Extend access to the billing API for the admins of Accounts, Cloudspaces and VMs

It's now possible for users who are not in billing group to calculate billing information about the resources which they have admin access to.

Starting from this release, we provide an API call to calculate the maximum capacity of a G8 based on it's current situation. This serves as an actual measurement not a theoretical one.

Now you can retrieve billing information about 1 specific resource instead of the whole environment. In addition to that, the billing API is now extended to provide the ability to retrieve consumption information in time-series format over a specific period of time. This is done by extending the current billing API to include a new API call /billing/calculateTimeseries as well as improving the API call billing/calculate to query information about a specific resource.